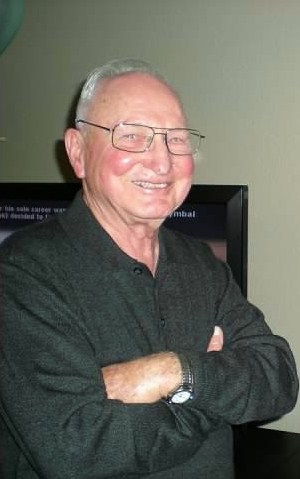 This odd custom we have, trying to sum up the worth of a man?s life in two hundred, two thousand or two words, struggling against clichés like devoted husband, loving father and grandfather, dedicated son and brother, although those ring true. Now we find ourselves, moments after the passing of this man, our dad, our mother's husband, searching for the right words to encapsulate his legacy. This is our tribute to a man who stood strong and firm (oh so stubbornly firm), who continually conquered illness (until this final cancer took him), who stayed true to his Catholic faith, who took no shortcuts and told no lies. John lived to 85. Being a child of the depression, he left high school in 1945 as a junior to join the Navy, where he served over 20 years as a dental technician and medic, often attached to Marine Corps units. He took up lightweight boxing. He traveled extensively and made history in 1949 as part of the crew of the U.S.S. Burton Island icebreaker, the first known vessel to reach Nome, Alaska midwinter. John loved to learn. He left the service twice to study dentistry at Creighton University, but, the Korean War intervened and he was called back to active duty in 1950 and again in 1953. Post Navy, in 1966, he completed his B.A.. He went on to earn his M.B.A. from Golden Gate University, this while working full time and, together with his wife, raising his girls. While all these ?facts? are true and help define the man, we, his family, will best remember John, our dad, our mom?s husband, his granddaughters? doting papa, our rock, for his unwavering strength, uncompromising integrity, his unshakeable faith, his lighthearted jokes, his stubbornness, his readiness to give, his undeniable love, his BBQ, his shining eyes and always his smile. He is survived by his wife, Gerda, his daughters, Michelle and Melinda, and his granddaughters, Danielle and Kristen. In lieu of flowers, donations may be made to Hope Hospice in Dublin.