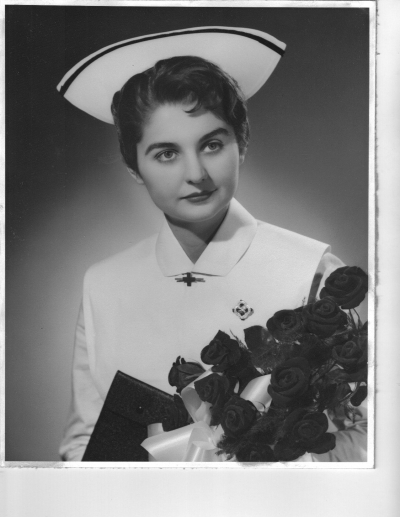 A memorial service celebrating her life will be held Saturday, Nov. 5 at 1:30 p.m. at Centerpointe Presbyterian Church, 3410 Cornerstone Court, Pleasanton. Joyce was born June 25, 1937 on the way to the hospital from the family farm outside Assiniboia, Saskatchewan. She graduated from Assiniboia High School in 1955. She finished high school while living with friends and then enrolled in nursing school. She graduated in 1958 after putting herself through Regina College and the hands-on training at Moose Jaw Union Hospital. She was recognized at graduation with honors.

Joyce moved to California from Canada in 1962, living on the Peninsula and then Pasadena where she met and married Rod Meyer. When Joyce was 39 she gave birth to her son, Ken.

They moved to Pleasanton in 1977 and Joyce joined the maternity room team at Valley Memorial Hospital in Livermore. After Joyce and Rod divorced, she raised Ken as a single mother, supporting them working as a Charge Nurse. ValleyCare Medical Center opened in Pleasanton in 1991, just three blocks from home for Joyce. She served there until she retired from full-time nursing.

Even after she retired, she loved nursing and the good people she worked with so much that she continued to work part-time shifts and served ValleyCareâ??s patients for 33 years. She spent more than 52 years as a registered nurse before her failing health forced her to retire in March 2010

Cindy Noonan, the chief operating officer at ValleyCare, met Joyce soon after she joined the hospital system 21 years ago.

â??Joyce was an outstanding labor and delivery nurse who was compassionate, caring and extremely competent. The OB physicians had a huge degree of trust in her skills as she served as their eyes and ears with their patients.

â??We could always depend on her to come in when she was off-duty to help her fellow nurses when we had a surge of patients. She was always calm in times of stress, was dependable, and always had a smile on her face.â?

In 2001, she met, Dave Lewis, and they became close friends and eventually soul mates. After retiring from full-time employment, Joyce and Dave traveled widely. Her favorite destination was the ruins of Ephesus on the coast of Turkey.

Joyce and Dave were active members of the Centerpointe Presbyterian Church in Pleasanton.

Dave remembers her as a great cook who loved to entertain and be around her many close friends.

â??She liked to have four, six or eight people over for dinner,â? he said.

She is survived by her son Ken Meyer in Gilbert, AZ, brothers Ken Westerlund of Edmonton AB and Bryson Needham of Ashcroft BC, Canada; grandchildren Dylan and Natalie Meyer; and her life partner of the last 10 years, Dave Lewis of Pleasanton.

Memorial service
A memorial service celebrating her life will be held Saturday, Nov. 5, at 1:30 p.m. at Centerpointe Presbyterian Church, 3410 Cornerstone Court, Pleasanton.
Make a donation
The family prefers gifts in her memory be given to a favorite charity.
About this site     Contact us