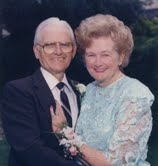 Marjorie Joyce Andreatta passed away peacefully on Nov. 3 in Pleasanton. She joins her husband Geno of 69 years who passed on Sept. 12.

Marge was born in Rockhampton, Queensland, Australia on Feb. 7, 1923, the oldest child of James and Christine Hurley. In 1942, she met Geno M. Andreatta, a handsome American soldier stationed in Australia. A serendipitous train ride to the beach set the stage for their meeting, which flourished into their courtship and marriage on March 7, 1944. One of 15,000 Australian warbrides, Marjorie left behind family, friends and way of life to embark on the joys and hardships of a new life in America with her husband.

Marjorie worked as a candy girl at the Roosevelt Theatre in San Francisco before becoming an operator at Pacific Bell in 1954. Over 30 years of service, she progressed to and retired as a Trunk Engineer. In her retirement years, she maintained her relationships with Pacific Bell Telephone Company Pioneers and The 432 Club. When Marge and Geno relocated to Pleasanton in the mid-80s, she kept busy crafting, spoiling her grandchildren, and devoting her time and notable talents to organizations that helped others, including Daughters of the British Empire and Pleasanton Senior Center. She also volunteered at the Valley Care Health System, both in the hospital and the Thrift Shop, which helped purchase new equipment for the hospital. Along with her husband, she was active in the 41st Infantry Division Veterans Association. One of Marge?s greatest joys, however, was her participation with Geno in the WWII Foreign Warbrides Association, enjoying many trips to reunions across the country, connecting and bonding with other warbrides. Over the years and across the ocean, Marge retained strong ties to her family in Australia, including her late brother Viv and his wife Beryl, her brother Jim and his wife Ellen, and her sister Margo, as well numerous nieces and nephews. In addition to hours on the phone, Marge made and hosted numerous visits with her family.

Marjorie is survived by her 3 daughters, Janis Martinelli (Ed), Sandra Katona (Don), Judi Hinkson (Howard); her 8 grandchildren, 20 great-grandchildren, and 1 great-great-grandchild. In the last 5 years, Marge?s life was also enhanced by the very special relationship with her dear friend Diane Mara and by the spiritual guidance of her pastor Heather Hammer. What will be missed most about Marge are her generosity, her sassy and unstoppable sense of humor, and her boundless devotion to family.

Family and friends are invited to a graveside service at the Sacramento Valley Veterans Cemetery on Friday, Nov. 15 at 3 p.m. There will also be a memorial service on Saturday, Nov. 16 at 2 p.m. at Lynnewood United Methodist Church in Pleasanton. In lieu of flowers, please consider carrying on Marge?s legacy of service with a memorial donation made to the organization of your choice. Some of Marjorie?s favorites were those working toward the early detection of breast cancer, The American Red Cross, and Wounded Warrior Foundation.