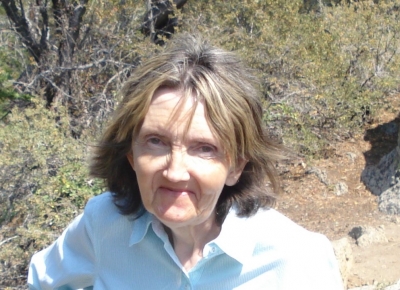 She was born on April 26, 1948 in Livermore, California to Manuel and Marie Santana. She grew up and enjoyed her childhood in Pleasanton, living only a few blocks from the town’s Main Street District. She attended and graduated from Amador Valley High School in 1966 and went on to Chabot College, earning an Associate in Arts Degree in 1969. She worked at the Alameda County Fairgrounds in preparation for the Alameda County Fair during her summers.

She met her husband, William Edgar Gregory, Jr. at a church dance in 1969. They were married at St. Augustine’s Catholic Church on October 24, 1970 in Pleasanton. In the early 1970s, she worked as a Clerical Assistant for Blue Cross in Oakland. After the birth of her first child, she became a homemaker, dedicating her time to her children. She also briefly worked as a teacher’s aide in her children’s schools for the Alum Rock Union School District in San Jose. Mary Ann had a passion for learning. Besides Chabot College, she attended various colleges and universities, including California State University, Hayward, San Jose State University, Condie College, Sacramento City College, and American River College.

She is survived by her four children, Carol Ann, Lisa Ann (Jim) Schneider, Michael William (Annie), and Deborah Ann (Sergio) De La Fuente, her six grandchildren, Alexander Kropf, Sebastian and Rafael De La Fuente, and Brooks, Beckett, and Britton Gregory, her sister-in-law Rhoda Richardson of Michigan, her first cousins Liz Haide of Oregon, Virginia Kallman of Corralitos, and Allan Faria of Santa Cruz, and numerous nephews, nieces, and distant cousins. She is preceded in death by her parents, her sister Jeannie Wilkinson, and her husband.

Mary Ann loved learning about local and U.S. History and enjoyed to travel so she could visit her children and grandchildren. She was a big fan of sightseeing and would always want to buy postcards, refrigerator magnets, and other various mementos from the places she visited. Mary Ann also enjoyed cross stitch sewing, scrapbooking, and baking. She had an affection for animals, especially cats, having them as pets as a child and throughout her adult life. Donations can be made in her memory to the Amador-Livermore Valley Historical Society, 603 Main Street, Pleasanton, California 94566.

A private burial service will be held for family members on April 8, 2021 at St. Augustine’s Cemetery in Pleasanton.