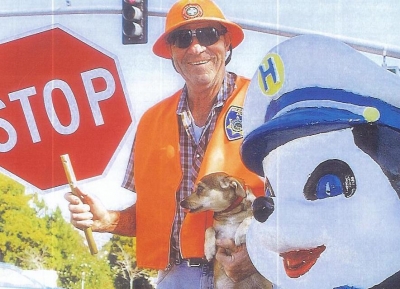 Maurice was born January 12, 1939 in Long Beach, CA to Maurice C. Cook, Sr. and Theola Mae Cook. In his younger years, he was an active member of DeMolay and later became a Second Degree Mason. He married Susanne Vivion in 1959. During the winter months he enjoyed taking his family hunting and fishing and in the summers they waterskied and raced speedboats.

When he retired from his QA engineer profession, he became a local favorite with school-aged children as one of Pleasanton?s school crossing guards. His 5 foot tall Harbor Seal mascot, ?Harbie?, could be seen by pedestrians and passing cars each day. Local newspapers even put his photo in the paper, highlighting him as a local colorful character. In his later years, he stuck closer to home and became content raising farm animals on his acre of property in rural Pleasanton. He often supplied fresh eggs for breakfast events at their neighborhood church, Faith Chapel.

A Celebration of Life will be held at Faith Chapel, 6656 Alisal Street, Pleasanton, on Saturday, November 10, 2012 at two o?clock in the afternoon. In lieu of flowers, feel free to donate to the nonprofit group ?Kids Day of Fishing? at www.kidsdayoffishing.org which caters to under-privileged and special needs kids and their families in the Bay Area.

Photo Gallery
0 photos Upload a photo
Remembrances
2 entries Submit a remembrance
From melisaann
April 12, 2018
you are assuming existence expectancy will stay unchanged? people who grew up in some of the worst conditions of the past century are still kicking round these days. a few humans suppose the oldest human to ever stay may additionally already be alive...
Read more
Video
Upload a video