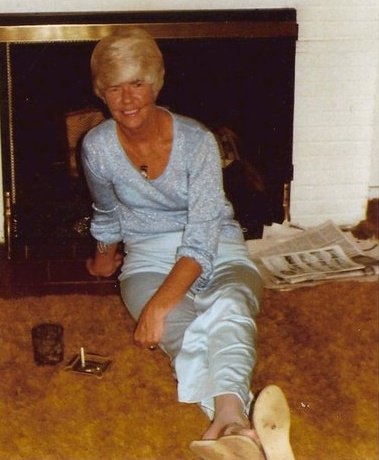 On August 19th, 2018, Nancy Torrey Elsnab left this life for the next. Born on January 22nd, 1929 in San Diego, Nancy spent most of her life as a resident of Pleasanton, California. She made sure to immerse herself in her small town, and knew every face she passed. A fan of the restaurants on Mainstreet, she was a frequent patron of Strizzis, Pastas, and Barones.

She spent most of her adult life on St. John Street, raising her 4 children and favorite dog, Flame. She was unfortunately preceded in death by two of those children, Karen Elsnab Rider and Tommy Elsnab, her parents Al and Vivian Torrey, and her brother, Robert Torrey. They have now been reunited for an endless happy hour, presumably on the shores of tropical beaches.

Finding herself a single woman in the 1970s, she set out to make a way for herself. A savvy business woman, she discovered a way to have people pay for her favorite hobby – travel. She co-founded Athenour Travel Agency and spent many years leading tours around the world for both novice and seasoned adventurers such as herself. Her favorite country was Kenya, and she made several trips over the years. She would return with a myriad of local souvenirs that she would later force on unsuspecting family members.

Her house was always open for BBQs, cocktails, and general socializing. Constantly on the move, she appreciated a good meal with good company more than most, but as we all should. A Pearl Harbor survivor, Hawaii was in her blood and she spent several months a year enjoying the islands. She especially enjoyed when family members made the trip with her.

Photo Gallery
0 photos Upload a photo
Remembrances
0 entries Submit a remembrance
Memorial service
We will be celebrating the life of Nancy Elsnab at Barone's on October 6, 2018 from 1:00 to 4:00.
Make a donation
In lieu of flowers, please step outside tonight and enjoy the sunset with a loved one and your favorite drink.
About this site     Contact us