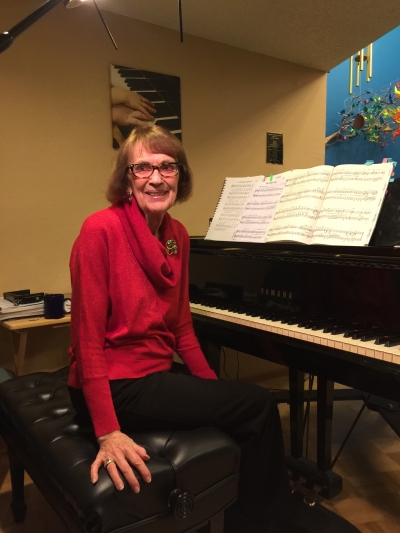 Pat Mielke, born March 23, 1934, died on December 2, 2019, after having an unexpected cardiac arrest three days earlier. She is survived by her two children - Lynne and Eric Mielke; five grandchildren - Maxwell, Erica, and Madalyn Mielke of Indianapolis and Spencer and Connor Gowey of Pleasanton; her sister Karen Case of Denver; and four nieces and one nephew. Her loving husband Keith Mielke passed away almost exactly three years earlier.

Pat was born in the small town of Norton, Kansas, where she grew up the daughter of Alice and Marion Harper. She attended Phillips University in Enid Oklahoma, where she met her future husband Keith while playing piano for the dance band where he sang and played saxophone. They spent two years in Germany while Keith was in the army, then moved to Syracuse New York and then East Lansing Michigan for his graduate school, and then to Bloomington Indiana where the family lived for many years while her husband was a professor at Indiana University. They joined the Unitarian church while in Bloomington.

Pat’s college degree was in Early Childhood Education, and she taught nursery school and eventually bought and ran her own nursery school in Bloomington for several years. She always had a love for music and was an excellent pianist who could sight-read and play almost any piece of music beautifully.

Pat and Keith moved to New York City in 1978 for around 20 years and both worked for Children’s Television Workshop (the producers of Sesame Street) during that time. While in New York she sang in the internationally acclaimed 1986 champions Sweet Adeline’s Ramapo Valley Chorus. They moved to Pleasanton in 1999 to be closer to their daughter. She was very active in the Unitarian church in Livermore where she was on many committees and played the piano for countless services. She was also active in AAUW, book clubs, and other groups. She was a constant source of support and love to her entire family and to all who knew her. She will be dearly missed.

Her urn will be placed alongside that of her husband at the California Central Coast Veteran’s Cemetery in Seaside, California. A memorial service will be on Saturday, January 18 at 3:00pm at Unitarian Church, 1893 N Vasco Rd, Livermore, CA 94551.