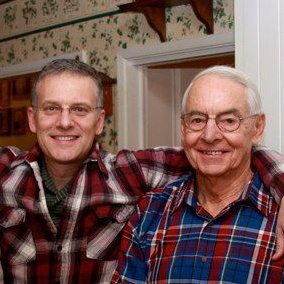 Richard Behiel passed away peacefully December 5, 2012 surrounded by family at ValleyCare in Pleasanton, CA. He was 80. Richard suffered complications due to breaking several ribs after a fall in October while doing yard work at home in Dublin.

Richard, the 2nd of 8 children, was born June 6, 1932 in Fort Saskatchewan, Alberta, Canada. He left the family farm in 1959 and moved to Oakland with his sister Lorraine and her husband Lee Dansereau. Richard and Lee, and several others of the Behiel family, would eventually retire as union carpenters. He was especially proud of his work on the Oakland Coliseum, BART Tube, SJSU Business Tower, and building his first house in the Oakland hills. Richard married Yvonne Lapointe in 1961 and moved to Pleasanton in 1970 to raise their four children. Richard moved to Dublin in 1982 during a divorce.

Richard enjoyed Canada-USA family reunions, annual Father?s Day picnics, and spending time with family and the great neighbors of Hillsdale Drive throughout the 1970?s. He spent his retirement working in his home workshop, helping others, having coffee with friends after a workout at the gym, and watching as many of his grandchildren?s sporting events as possible.

Photo Gallery
0 photos Upload a photo
Remembrances
1 entry Submit a remembrance
From Pauline & Lew Ramstead
Dec. 15, 2012
Scott,Art,Dave & Nanette. We were saddened to hear of Richard's passing. He was a great person. Although we hadn't seen him in awhile everytime we met it was just like old times. When Lorraine & I were kids(12) he used to bribe us to polish his ...
Read more
Video
Upload a video

Memorial service
The Vigil will be at the Catholic Funeral Chapel in Pleasanton 7:00 Dec. 21st, (4457 Willow Rd.) and the Funeral at St. Augustine?s 1:00 on the 22nd.
Make a donation
In lieu of flowers, Richard would like donations sent to the Juvenile Diabetes Research Foundation. www.jdrf.org
About this site     Contact us