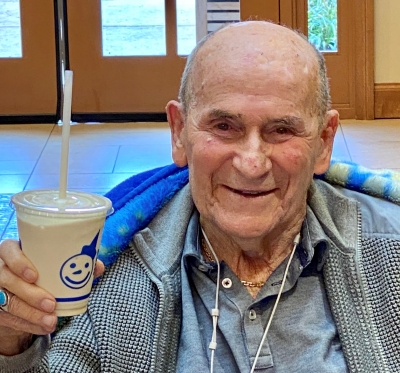 Robert Germain Athenour passed away on Monday, August 10, 2020 at the age of 91. He touched many lives around the world with his caring spirit, and his love of people. He was an amazing family man, teacher and friend.

A native of Sunol, Bob graduated from Amador High School in 1947, with only 26 students in his class. He attended San Jose State University, and received his undergraduate degree in Spanish, French and Social Studies; and then his teaching credential in 1952.

After college, he joined the US Air Force and was stationed at Parks Air Force Base in Pleasanton. He completed a tour of duty serving the Education Centers for the Air Force bases in Japan, Korea and Okinawa. Upon his discharge he returned to Pleasanton and began teaching at Amador Valley High School, where he taught Spanish (and French) for 27 years. He was one of those teachers that changed many lives.

In 1957 Bob married Marilyn Culford Vargas whom he had known since high school. They raised three children - Karl, Tom, and Anne. Bob and Marilyn were married for 61 years. Somewhere along the way, Bob caught the travel bug and in 1972 opened Athenour-Macchi Travel, which later became Athenour Travel Service. For years he led tours all over the world for both adults and students. He shared his respect for different cultures and love of adventure with his family and friends, as well as many clients. Many great memories were made on these trips.

Bob’s favorite place was Mexico. He loved the Mexican culture, language, and history – and most importantly the people. It started in college when he spent a summer with a family in Saltillo, Mexico as an exchange student. In 1961 he was instrumental in bringing the first student exchange program through the American Field Service (AFS) to Pleasanton. Then in 1983, Señor Bob, as he came to be known, co-founded the Pleasanton/Tulancingo Sister City Association. The purpose of the association was to develop communication, friendship and understanding between people of two cultures; but it became much more than that! His friends from Tulancingo, as well as the Sister City Program, held a special place in his heart. When visiting Tulancingo, it was common for people driving by to stop and welcome him with big hugs and excitement!

As a longtime member of the Pleasanton Rotary Club, he was passionate about raising money for wheelchairs, and going on wheelchair distribution trips throughout the world. Over the past 18 years, he was involved with fundraising and/or delivering more than 8,000 wheelchairs internationally to people who otherwise couldn’t acquire one. In addition to his work with the Wheelchair Foundation, he enjoyed volunteering to accompany Rotoplast medical teams, who performed cleft palate surgeries, into remote villages, and translate for the families and the doctors.

Señor Bob loved spending time with family and friends. He especially enjoyed breakfasts at the Rising Loafer and Stable Café, Happy Hour beers at Alberto’s, class reunions with former students, and invitations to as many social events as possible. He loved good people, and a good party! Bob made such an impact on people’s lives. He made everyone feel so special, that despite a nationwide pandemic, he had over 100 people in decorated cars drive by Creekview to celebrate his 91st birthday in a parade like fashion. He had an unmatched affinity for truly caring about people, and the friends he made along the way have proven to be lifelong.

Due to the current pandemic, Bob’s mass and internment will be private. The family will plan a Celebration of Life in both Pleasanton and Tulancingo when the Covid Restrictions are lifted. In lieu of flowers, donations may be made to the Pleasanton Sister City Association, Pleasanton Rotary Foundation/Wheelchair Project, or ValleyCare Charitable Foundation’s Wish Project Fund in memory of Robert Athenour.

¡Vaya con Dios, Señor Bob! We love you and will miss you greatly, but are comforted by the promise that we will meet again!