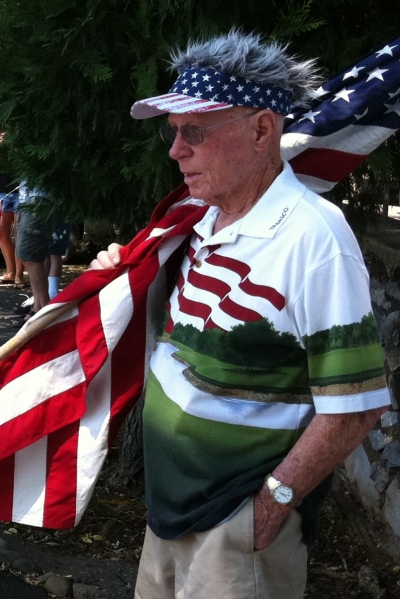 Robert L. Nethery, "Bob" to friends and family and "Bobbie" to his grandchildren, died in his home in Murphys on April 8, 2014, after a two year battle with esophageal cancer. He was 84.

Bob was born the sixth of eight children to Harry and Bernice Nethery on September 20, 1929, in Shullsburg, WI. He spent his teen years growing up in Rockford, IL, graduating from the local high school in 1947.

A member of the Illinois National Guard, in 1952 Bob was activated during the Korean War and spent time at Camp Cook in Lompoc, CA before being deployed to France. His time in California inspired him to make his home in the Bay Area after his honorable discharge from the United States Army in 1953. He was employed by Safeway Stores for 27 years, ending his tenure as the store manager in Pleasanton in 1979. He was then self-employed selling solid waste management and recycling equipment before retiring to Murphys with his wife Jackie in 1994. Always active in the community, Bob was a devoted Rotarian, a charter member of the Moraga club, past President of the downtown Pleasanton club, most recently a member of the Arnold club, and a Paul Harris Fellow. He was a member of Free and Accepted Masons of California, Ophir Bear Mountain Lodge #33, Murphys, CA. He was also a member of Forest Meadows Men's Golf Club and the Murphys Mark Twain Branch #140 of SIRS where he served as Big Sir in 1997. He served on the board of the Forest Meadows Home Owners Association for 10 years.

Bob was an active member of Foothill Community Church in Angels Camp. He was Pastor Dave's minister of humor and it was his honor on Veterans Day Sunday to welcome the congregation and share a piece of patriotic history. Bob was an avid golfer and skier. He and Jackie enjoyed traveling to many golf and skiing events with friends, family, and fellow Rotarians.

Bob loved life and loved to laugh. One friend said, "Bob doesn?t let any grass grow beneath his feet." His joy of life was infectious, and he often talked about good times being full of "laughs and giggles." He found great pleasure in generosity and lived by the Golden Rule: "Do unto others what you would have them do unto you." Probably his greatest joy came from having all of his children and grandchildren together.

He is survived by his wife, Jackie, of 48 years, sons Tom (Peggy) of Fairfield and John (Lori) of Pleasanton, daughters Nancy (Larry) of New York, NY, Kathy of Fremont, and Kimberly (Blake) of Westminster, CO, as well as siblings Shirley and George (Roberta) of Florida and Dorothy of Illinois, and sister-in-law Marlys Nethery of Illinois. Bob was blessed with ten grandchildren: Bryanna, Grant, Hailey, Madison, Sydney, and Sophie Nethery, Nicholas and Robert Haughton, and Griffin and Adam Hill.

Photo Gallery
0 photos Upload a photo
Remembrances
0 entries Submit a remembrance
Memorial service
A red, white, and blue patriotic Celebration of Life will be held at 10:30 a.m. on Saturday, May 10 at Foothill Community Church, Angels Camp.
Make a donation
In lieu of flowers, donations in Bob's memory may be made to Christian Family Learning Center (CFLC) PO Box 880, Angels Camp, CA 95222. Link: http://www.cflcschool.org/
About this site     Contact us