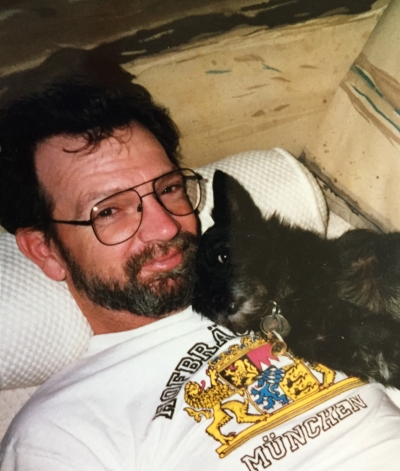 Ron “mosquito bite” Wing, formerly of Pleasanton, departed this life on Easter Sunday, 2019; he was 70 years of age. Ron started in the family farming business at an early age, and was known for his mechanical and welding skills. He was retired from Lawrence Livermore National Laboratory. Ron graduated from Amador Union High School in 1966, and studied Automotive Technology at Chabot College. He had a love of the outdoors: enjoying camping, skiing, boating, fishing, hunting, racing, gardening, canning (those peppers!), and many other endeavors. His annual vacation included trips on the Jeepers Jamboree, starting before he was actually old enough to drive it. He was active in his community, supportive of local 4H and FFA groups, Livermore Gun Club, the Livermore Rodeo, a past vice-president of the Gladiators Car Club, a member of Joaquin Murrieta #13 ECV, a former Mountain House School District Board member, and many other unassuming roles. Ron loved animals, and was never without at least one dog at his side.

Ron was preceded in death by his parents, Robert “Bob” Wing and Laurine Wing.

Photo Gallery
0 photos Upload a photo
Remembrances
0 entries Submit a remembrance
Memorial service
Internment will be at Dublin Pioneer Cemetery. Arrangements by Graham-Hitch Mortuary, 4167 First St, Pleasanton, CA 94566. A memorial service will be held at Dublin Pioneer Cemetery (6600 Donlon Way, Dublin, CA) on Saturday, May 4, at 11am, followed by lunch at the adjacent Kolb Sunday School Barn.
Make a donation
In lieu of flowers, Ron may be honored by supporting the preservation of the history of the area he was proud to be a part with donations made to Dublin Historic Preservation Association (www.dhpa.org).
About this site     Contact us