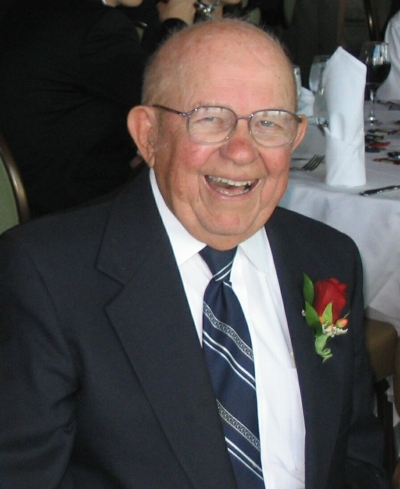 Warren MacLeod Annis passed away on Dec. 21, 2013, from natural causes. At the time of his death Warren had been living in Livermore for 2 ½ years after residing in the same house in Pleasanton since 1950.

Warren was born on Oct. 21, 1920, in Duluth, Minnesota, the last of six children of Roderick Dhu Annis and Ethel Foss Annis. He attended Duluth, MN schools, graduating from Central High School and Duluth State Teacher?s College (now the University of Minnesota at Duluth) with a degree in Biology and a minor in Chemistry. After graduating college in December of 1943 Warren attended the Naval Reserve Midshipman?s Officer?s Training School (aka "90 day Wonder") at Columbia University in New York, New York, graduating as an Ensign on June 29, 1944.

On July 3, 1944, he married Fannie Lambert, his college sweetheart, on his way to his assignment to the Amphibious Base at Coronado, California. Warren was then deployed to the USS Menard, APA 201, and sailed in the South Pacific arena during World War II, participating in the landing at Okinawa on April 1, 1945. His ship also transported the first occupational troops into Nagasaki, Japan, after the dropping of the atomic bomb.

In March of 1956, he joined the late Ernest W. Schween in the insurance business, taking over the business in 1963 upon the death of Mr. Schween. Warren had an insurance office, a building he owned, at 99 W. Neal Street, Pleasanton, for nearly 30 years.

During his retirement, Warren delivered "Meals on Wheels" for 18 years and he also worked in his woodworking shop, becoming an expert at the woodworking skill of intarsia, a form of wood inlaying that is similar to marquetry. Warren loved playing bocce ball at the Pleasanton Senior Center. Fannie and Warren also traveled the world during their time together.

Warren was the Charter Secretary of the Rotary Club of Pleasanton in 1965 and served as that club?s President in 1968-69. He also served on numerous committees over the years. In 2011, Warren was awarded the first Lifetime Membership ever given by the club. A club scholarship, which Warren helped found in 1967, was named after him, becoming the "Warren Annis Service-Above-Self Scholarship."

Warren is survived by his children, Larry (Carolyn) of Pleasanton, CA and Jim (Gini) of Reno, NV, his grandsons, Greg Annis of Oakland, CA, Keith Annis of Lima, Peru, Kevin (Megan) Annis of Reno, NV, and Brian Annis of Burbank, CA, and his great grandchildren, Connor and Hailey Annis.

He was predeceased by his parents and five siblings and his wonderful wife of 68+ years, Fannie.

There will be a heart-felt Celebration of Life for Warren at 2 p.m. on Sunday, Jan. 19 at the Veterans Memorial Building, 301 Main St. Warren asked that in lieu of flowers, donations be made to: The Warren Annis Service-Above-Self Scholarship c/o The Rotary Club of Pleasanton Foundation, P.O. Box 352, Pleasanton, CA 94566 or Children Incorporated, 4205 Dover Road, Richmond, VA 23221.

Photo Gallery
0 photos Upload a photo
Remembrances
1 entry Submit a remembrance
From Donna Christner-Lile
Dec. 30, 2013
Larry and Family, Warren was such a delightful man. Dennis enjoyed his company so much. I always told Dennis, I want "us" to grow up like Fanny and Warren. It is ironic that Dennis and Warren went to heaven the same day. I'm so Glad Warren is now w...
Read more
Video
Upload a video

Memorial service
There will be a heart-felt Celebration of Life for Warren at 2 p.m. on Sunday, Jan. 19 at the Veterans Memorial Building, 301 Main St.
Make a donation
Warren asked that in lieu of flowers, donations be made to: The Warren Annis Service-Above-Self Scholarship c/o The Rotary Club of Pleasanton Foundation, P.O. Box 352, Pleasanton, CA 94566 or Children Incorporated, 4205 Dover Road, Richmond, VA 23221.
About this site     Contact us