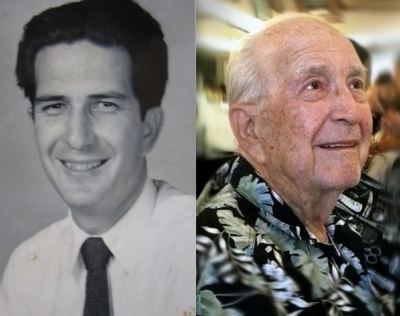 He served aboard the USS Nassau during WWII and was still serving the country abroad when his first child, Jane, was born in December, 1944.

Over the the next 19 years, David and Dorothy brought 5 more children to this world: David (Rusty), Michael, Debbie, Don and last but not least, Diana (Dedi). Shortly after Dedi's birth, his daughter Jane and her loving husband Don Helminiak brought his first grandchild, Chris Helminiak, into this world.

David had many passions in life including archery, photography, flying RC planes, cycling, hiking, and riding his motorcycle, but his greatest joy and source of pride was his children.

David retired in 1991 and moved to Colorado Springs, Colorado, where he remained busy helping others, playing with his RC planes, riding his bike, and enjoying the job of active grandparent.

David's wife of 66 years, Dorothy, passed away in 2010, and in 2011 he moved to Pleasanton to be closer to his son Don and daughter Dedi.

He was cared for lovingly over the next three years, with daily visits and peaceful conversations with them in the outside gardens. This time was not simply an act of kindness on Don and Diana's part: the joy in this time together went both ways. The three of them enjoyed watching the changing seasons, spotting different birds, and laughing as squirrels continued to outsmart their 'squirrel proof' bird feeders. Their time with him will be missed.

David's attitude toward life was positive and enriching. He never gave up, yet he accepted what he could not change with dignity. Even in his late 80's, despite numerous physical limitations, he derived great pleasure zipping around on his recumbent bicycle, often riding up to 6 miles. The caring staff at the Pleasanton Nursing and Rehabilitation center were pleasantly surprised to see him riding through the parking lot and would stop and give words of encouragement and cheer.

David is preceded in his death by his son Michael (Mike), and is survived by his remaining 5 children and their spouses as well as grandchildren Christopher and Lara Helminiak, Tracy Fuqua, Michael and Steven Brennen, Nancy and Toby Gibson, Amy Brennen, and Brenna and Aubrey Fisch; and great grandchildren Jamie Fuqua and Joshua Wicken- Arnot. Mike's widow, Jerilyn Teresi, and her son J. T. remain a cherished part of the family.

In his last days, despite a rapid decline in health, he held on long enough for his children and some grandchildren to visit.

He will be missed greatly.

This tribute would not be complete without giving thanks to loving care given to him over the last two years by the wonderful staff at the Pleasanton Nursing and Rehabilitation center. They were very much like family and many tears were shed when he passed away.

The following quote was found in his sachet of important documents. His daughter Diana remembers him reading this to her when she was but a teen. These words exemplify how he lived his life:

A Poem by Tecumseh

"So live your life that the fear of death can never enter your heart. Trouble no one about their religion; respect others in their view, and demand that they respect yours. Love your life, perfect your life, beautify all things in your life. Seek to make your life long and its purpose in the service of your people."