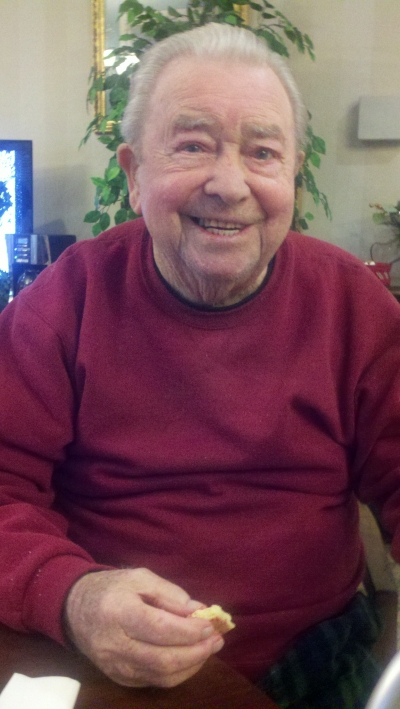 William (Bill) Arthur Mulhearn, formerly of Pleasanton, California, passed away peacefully on April 13, 2017 in Winston-Salem, North Carolina. He was preceded in death by his wife, Elizabeth Ann Mulhearn. He was born in Barrow-In-Furness, Lancashire, UK to William and Catherine Mulhearn. As a young man, he travelled extensively as a merchant seaman in Asia, the Caribbean and the South Pacific. While working in New Zealand, he met and married his wife, Elizabeth in 1950. In 1953, they settled in San Francisco, moving in Pleasanton to raise their family in 1969. Bill worked for 20 years for Coca-Cola in San Francisco and San Jose, and later managed Universal Cinema Systems in Pleasanton. He received great joy from his garden and shared his flowers and produce freely with friends and neighbors. Bill was a wonderful father and very proud of his three daughters, Kathleen Schultz, of Adelaide Australia, Maureen Craig, of Winston-Salem, NC, and Colleen Griggs of San Jose, CA. Also his four grandchildren, Elizabeth Broughton, of Winston-Salem, NC, Kyle Griggs of San Jose, CA, Ian Coonen, of Winston-Salem, NC and Caty Coonen (deceased) of Winston-Salem, NC.

Photo Gallery
0 photos Upload a photo
Remembrances
1 entry Submit a remembrance
From Marlene Anne Mulhearn
June 3, 2017
A wonderful generous uncle who made wonderful memories for me to treasure forever. A truly amazing man who loved all his family and now back with his beautiful wife Liz. Always in my heart xx
About this site     Contact us