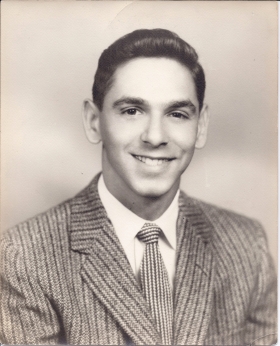 A beloved husband, father, grandfather, brother and friend, Don Del Vecchio passed away after a brief but valiant fight with cancer at the age of 78. Don died at his home surrounded by his family. Don was born in Passaic, New Jersey where he lived with his parents, Domnick and Mary, and his younger sister Loretta. He attended college at the University of Oklahoma and received a bachelor?s degree in geology. In Oklahoma, he met his wife, Alice, who has been by his side for the last 56 years. After graduating college, Don got married then entered the Marine Corp in July 1958. In the Marine?s, Don served as an Officer.

In 1966, Don settled in Pleasanton where he and Alice raised their two daughters, Linda and Donna. His family has grown to include Linda?s husband Gary (Cooper) and Donna?s husband Jeffrey (Henninger). In addition he is the proud grandfather of four grandchildren, Karrah, Andrew, Shane and Nicole. Don has had many interests over the years, these included golfing, sailing, playing the guitar and piano, cheering on the Yankees and the Oklahoma Sooner football team. Most recently his interests included collecting bronze statues, and world traveling. He had a passion for enjoying life and celebrated all occasions. He was the ultimate host and loved nothing more than throwing parties for family and friends.

Don was preceded in death by his parents. He is survived by his loving wife, daughters and sons in- law, grandchildren, sister, and many friends.

A Rosary will be conducted on Friday, Oct. 3, 2014 at 1:30 p.m. at St. Elizabeth Seton Chapel in Pleasanton. A Funeral Mass will begin at 2 p.m. followed by burial service at St. Augustine?s Catholic Cemetery. In lieu of flowers the family asks that you make a donation to your favorite charity in Don?s memory.