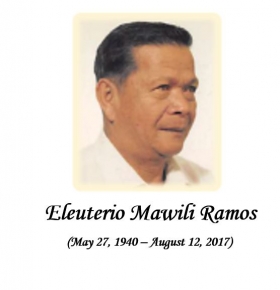 Catholic funeral services will be held from 12:00 to 12:45 p.m., on Tuesday, August 22, 2017. The burial will follow at Holy Sepulchre Catholic Cemetery, located at 1051 Harder Road, Hayward, California. Arrangements will be provided by Holy Angels Funeral Services Center.

Eleuterio, or “Boy” to those who knew him, was born in Tanay, Rizal, Philippines to Eugeniano Ramos and Felisa Mawili on May 27, 1940. He was educated and raised to adulthood in his hometown of Tanay, in Rizal Province, Philippines. He married Estelita Quintos Perez on August 10, 1974 in Caloocan City, Metro Manila. He worked as an agriculturist for the majority of his life until he brought his family to California in the early ‘90s, where he worked different jobs to provide for his family. He was quiet, patient, content, simple, but strong. He was a hard worker, a loving husband, a strict father, and a playful grandfather. He became a proud American Citizen, while remaining a proud “Tanayan.” He was involved in the “Tanay Club of America,” where he enjoyed listening to friends tell news and stories from his hometown; he also enjoyed playing “mahjong” with the company of hometown friends. Eleuterio is preceded in death by his parents, siblings, other family members, and most recently by his brother Teodulo “Maestro or Kuya Ulo” Ramos, who passed late last year.

Eleuterio is survived by his wife, Estelita, his children: Emmanuel, Maricel and Jonell; his daughter-in-law, Josephine; his sisters: Norberta Ramos Abayan and Emelina Ramos; his brothers: Gil Ramos and Rolando Ramos; his grandchildren: Yohanna, Joshua and Felize Ramos; all his brothers and sisters-in-law, cousins, nephews, nieces, other family members, and friends.

Please send flowers, cards and memorial donations to Holy Angels Funeral Services Center at 1051 Harder Road, Hayward, California 94542; telephone: (510) 537-6600. The family of Eleuterio wishes to extend their sincere appreciation to all who participated and assisted in celebrating his life and to all who sent their heartfelt condolences, thoughts and prayers.