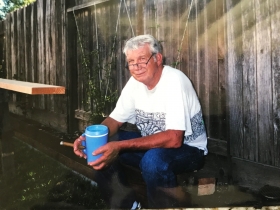 Mr. George Skeith III died peacefully in the hospital on 9/1/2020 in Pleasanton CA. at the age of 80. George was preceded by his wife Sandra who passed in August of 2018. George is survived by his two sons George Skeith IV of Shelby NC and Scott Skeith of Pleasanton CA; daughter in law Angela Skeith and two grandchildren Madeline and Dane Skeith. George was born on July 17th 1940 in San Diego CA to George and Jeneviv Skeith. He attended High school in Santa Ana CA and married Sandra in 1963. George and Sandra had two boys who remember him as a loving father who taught them the value of hard work, resourcefulness and conservative values. As a boy who's father was in the navy he spent his early years in Hawaii and Guam. George enjoyed hot rods and motorcycles. He taught his boys how to work on cars at an early age. They have fond memories of him telling stories of his Model A Ford and his youth in southern CA. He was also an independent business owner who ran a successful foundry in Santa Clara CA for 30 years. He was a loving husband to Sandra for 54 years and the family they shared will miss him deeply. A memorial service will be held at a later date. We would like to thank the family and friends for their prayers, love and support.