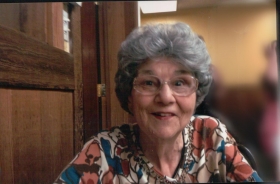 Gloria Marie Joseph Stahlnecker, a lifetime Pleasanton resident, passed away at the age of 89 years, on Wednesday, September 7, 2016, following a life well lived.

Gloria was born on Second Street in Pleasanton to Joe and Mary Joseph. Gloria's paternal Joseph (Damiao) family is considered one of Pleasanton's Heritage Families, having settled in Pleasanton in the 1870's. Gloria attended school in Pleasanton, graduating from Amador High School in 1945.

During WWII, Gloria served as a hostess at USO (United Service Organization) dances held at Pleasanton's Veteran's Memorial Building. Additionally, she and her father hosted many soldiers, sailors and marines from Camp Shoemaker (now known as Camp Parks) for dinner. For many years, Gloria remained pen pals corresponding with those she met. After graduating high school, Gloria worked at Camp Shoemaker and at the Livermore Veteran's Hospital as a secretary.

Just a year or so after he sold her a car, Gloria married Herbert Elwood Stahlnecker in May, 1950. The couple settled in Pleasanton, raising four children, Carl, Paul, Brian and Annette. While rearing her children, Gloria was actively involved in local PTA, Den Mother for her son's Cub Scout Den, team mom and taxi for her children's various sports teams, and an adult leader for Kottinger 4-H. She also worked at Valley View and Alisal Elementary schools from 1974-1980.

Gloria was a member of the Saint Augustine's Catholic Church and an active Life Member of the Ladies Auxiliary to the Veterans of Foreign Wars (LAVFW), including terms as Auxiliary President, until her mobility issues curbed her involvement. As a member of the LAVFW, Gloria organized an annual Holiday Boutique fundraiser from which the proceeds were used to serve local military service personnel, veterans and/or their families. She served proudly on the advisory committee overseeing the restoration and rededication project of the Pleasanton's Veteran's Memorial Building. Throughout her life, Gloria enjoyed cooking (she was a great cook), crafts, crossword puzzles and spending time with her family and many friends, many of whom she had known for years including those from the Amador High School.