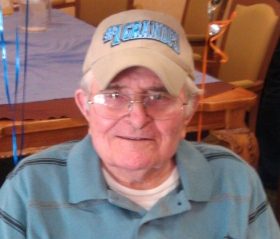 Harry Loos passed away in the early morning hours of June 10, 2013 at the age of 89. Harry is survived by his wife of 70 years, Irene R. Loos of Pleasanton, his sons Larry A. Loos of Hayward and James L. Loos of Pleasanton, grandsons James C. Loos, Anthony F. Loos and Jeremy A. Loos, great grandchildren Ryan J. Loos, Emma M. Loos, Owen J. Loos and Wyatt A. Loos. Harry, the son of Heinrich G. Loos and Ana M. Wacker, was preceded in death by his parents, six brothers and four sisters. Harry was born in Scottsbluff Nebraska where he graduated from high school and met and married Irene Schenaman. He started a small construction company, building homes, cement irrigation ditches, and other buildings and structures. He was a member of the Nebraska National Guard, was a founding member and coach of 23 Club, a little league baseball program, and was active in the Scottsbluff Nebraska Junior Chamber of Commerce. Harry loved to fish, hunt, garden and raise farm animals. In his later years, he remained very active and loved playing Bocce Ball. Harry and Irene moved to California in the 70?s where Harry became an insurance adjustor until injuries and health forced him to retire. Throughout his life, he was always the first to offer help to others and was known for his friendly and energetic personality, even during the years he resided at Pleasanton Nursing and Rehabilitation where he passed away. A memorial service for Harry will be planned for his family and close friends at a later date. The family requests no flowers and any donations should be made in Harry?s name to your favorite charity