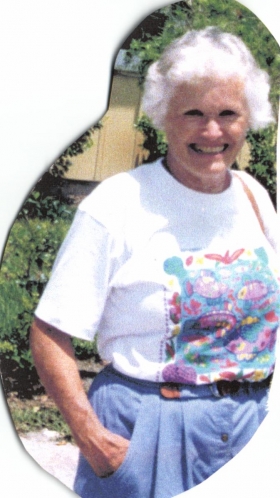 Born in Southern California in 1924, Hathily was raised in the Pasadena area and went to the University of Arizona in Tucson until World War II when her mother wanted her close to home.

Hathily met her future husband through a friendship with his sister. After her family moved back to Solano County, Hathily and Walter ("Brady") married and settled briefly on a ranch at Mokelumne Hill. They then moved to Orinda and began many adventures including sailing twice to and living in the South Pacific with their small children. Hathily moved with the children in 1957 to her father-in-law's Pleasanton ranch where they lived until 1979 when she moved to a house "in town."

Hathily was a devoted mother and dear friend. She loved being a Cub Scout den mother, cheering on her children in various sports and activities, dancing around the house, family car trips and traveling. She played tennis with her friends at Castlewood for many years and was a founding member of the Golden Acorn Chapter of the Children?s Home Society. She was always smiling and cheerful.

Hathily was diagnosed in 1997 with Alzheimer's and began the "long goodbye." She was pre-deceased by her parents, Marcus C. and Dorothy Peterson, her brother, Marcus E. Peterson, and her friend and former husband, Walter S. Johnson, Jr. She is survived by her four children, Walt Johnson (Pam) of Seminole, Florida; Marc Johnson of Pleasanton, Hathi Winston (Jerry Prettyman) of Pleasanton and Chris Johnson (Lori) of Sunol, along with 7 grandchildren.

The family thanks Eldercare Services, Hope Hospice and Pleasanton Nursing & Rehabilitation for the kind care of their mother. Graveside services were held Friday, April 24th at Suisun-Fairfield Cemetery. A Celebration of Life will be held Saturday, Aug. 8th.