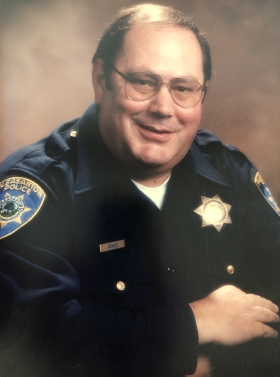 Jay Graves passed away on February 16, 2019 after battling cancer. Jay was born on April 20, 1943 in California to the parents of Paul and Edna Graves. He attended school in San Leandro before joining the Navy and serving as an Aviation Ordnanceman. Upon leaving the Navy, Jay became a police officer in Pleasanton, CA. Jay had a distinguished career where he was Pleasanton’s first K9 officer. Pleasanton recently dedicated its newest dog park after his K9 partner Cubby. Jay also served as a Narcotics Detective and a Field Training Officer. Jay retired after 29 years as a Sergeant. Jay was a long time and dedicated member of the California Narcotics Officers Association, an organization dedicated to battling drug abuse in California communities. Jay is survived by his two children, Valerie and Keith Graves, who both served in Law Enforcement in the Tri Valley. Jay is also survived by his two grandchildren, Caitlyn and Tyler Graves.

Jay spent his retirement years in Brentwood, CA. He was an avid fisherman, a mentor to many, a friend to all and will be fondly remembered and missed for his guidance, sense of humor, and the stories he told. A memorial service is planned for March 2, 2019 at Graham Hitch Mortuary in Pleasanton, CA at 2 PM. He will be recognized for his service to the Pleasanton community by the Pleasanton Police Honor Guard. Friends and family will then gather at the Pleasanton Brewery in downtown Pleasanton. In lieu of flowers, donations can be made to Kyles Village. This money will be used to support a Pleasanton Police Officer currently battling cancer. Checks can be made out to The Pleasanton Officers Charitable Foundation. Checks can be collected at the service or mailed to P.O. Box 1973 Pleasanton Ca 94566.