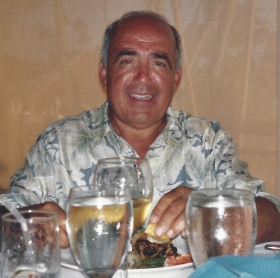 Joseph was born in San Salvador and spent most of his early life under the care of his dear grandmother, Estefana. He remembered his early years fondly and remained forever grateful to his loving abuela. He immigrated to San Francisco with his parents and sister Nellie in the early 1950s. Growing up near West Sunset Park, he attended St. Gabriel's, St. Ignatius, and finally Lincoln High School where he met Cindy, his future wife, in 1959.

Joe enlisted in the US Army in 1961 and served as Checkpoint Charlie in Berlin. He was a Cold War warrior as his life expectancy during the Cuban Missile Crisis was 10 seconds! Cindy joined him in Germany and the two were married October 10, 1962 in Augsburg. They resided in Germany for 2 years, then returned to San Francisco where they had two children, Kamara and David.

Joe was an example of reaching the American Dream. He began his career in banking as a check processor, but through hard work, talent and charm became the youngest Vice President in Union Bank history. He eventually branched out to International Foreign Exchange, where he became a Trader and then a Broker. His career took him and his family first to Los Angeles, then to New York, and eventually back to California. Joe believed that anyone could make it with drive, ambition, and a positive outlook. Joe loved life and his smile and easy elegance reflected this.

In his semi-retirement, Joe worked as a Custodian at Pleasanton Middle School for over a decade, where he was well loved by staff and students alike. Joe always enjoyed spending time with children and was an outstanding coach in many different sports for his own children and many more. He was a very athletic man and a lifetime fan of the 49ers and Giants, with many good times spent at Kezar Stadium, Seal Stadium, and Candlestick Park.

Joe was an accomplished golfer and spent much time out on the green where he could share laughs and cold beers with his buddies. Learning to play at Harding Park as a young man, he sharpened his skills on beautiful courses including Kapalua in Maui and his local favorite Calipe.

Joe leaves behind his high school sweetheart and wife of 58 years, Cindy, and his daughter, Kamara (Don). Predeceased by his beloved son, David and his parents, Jose and Margo, and sister, Nellie. He will be deeply missed by his great friends, including Mike, Bob, Larry and Leo, as well as his sister MaryAnn and beautiful nieces Lizzy, Becky, Jenny and Ashley and their children.

Joe was interned at a lovely private ceremony at St. Augustine's Cemetery in Pleasanton on October 30. Adios and Aloha to a great man! May he rest in peace.