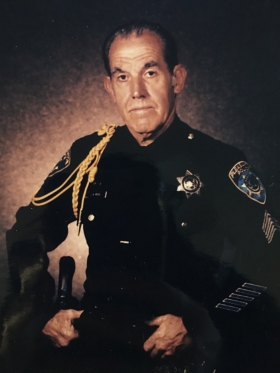 Joseph Anthony Rose passed away on Monday, April 30, 2018. He touched many lives with his outgoing personality and lovable spirit.

Joe was born in Hayward, CA. After high school, Joe joined the United States Army and served during WWII. He later joined the United States Navy and served during the Korean War. Once he returned home, he moved to Pleasanton in 1956 and became a police officer with the city. Joe served the city of Pleasanton for 29 years and retired as a sergeant in 1985. After he retired, he enjoyed teaching traffic school, as well as working on his 1955 Chevy pick-up truck.

Joe was predeceased by his loving wife, Millie Rose and is survived by his children Joseph Rose II (Donna Rose) of Pleasanton, Luanne Rose (Bob Kitson) of Pleasanton and Frank Rose of Stockton, as well as his grandchildren Mirissa Rose and Millie Sansom of Pleasanton. His laughter and generosity will be missed by all who knew him.

Joe taught a mandatory class I had to take for a speeding ticket. He made that day fun and informative! I've taken those classes before (!) but never was it such a productive experience. I enjoyed all his personal stories and upbeat attitude. I had the feeling there wasn't much he didn't know about being an effective police officer. Wish we had more like him. Rest well Joe--you definitely earned it.