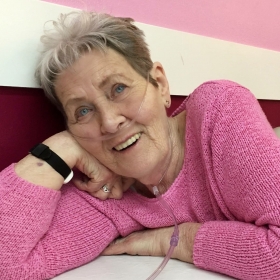 Judith “Judie” Johnson (nee O’Brien) passed away peacefully in Tucson, Arizona on August 22, 2016 surrounded by her family. Judie was born on July 6, 1939 in Chicago and attended St. Angela Academy in Morris, Illinois. As much as she loved the Midwest, the California sunshine was calling to her and so she moved with her four children to the San Francisco Bay Area. Judie was an independent free spirit who loved the ocean, eating popcorn, listening to Rod McKuen, and participating in all styles of dancing (she had even tried belly dancing!). When she retired from AT&T Communications in 1993, she finally had a chance to tackle all of the sewing projects that she had been putting off and was able to devote a great deal of time to her local St. Vincent de Paul Society. In 2006, Judie relocated to The Villages, Florida where she reconnected with her high school friends, played mahjong, researched her family genealogy, and participated in the Celtic Club. Everyone that knew her would agree that Judie was an unbelievably strong woman who spoke her mind, took care of those in need, and always put family first. Judie was preceded in death by her parents, Joseph and Naomi (nee Maroney) O’Brien and her siblings James O’Brien and Kathleen Buckley. Judie is survived by her four children: Sue (Armando Camacho) Gabriel, Ken (Stella) Gallagher, Erin (Mike) Patrick and Sharon (Tom) Hanson, six grandchildren: Meghan, Haley, Caitlin, Kevin, Shannon and Madeline, her great-granddaughter Tallulah, and her cousin Sharon (Ed) Kolton. Memorial donations may be made in her name to the St. Vincent de Paul Society, P.O. Box 817, Pleasanton, CA 94566