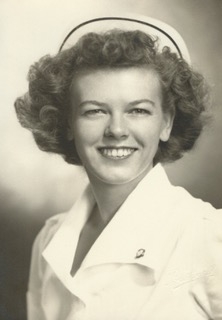 Lila Dorothea McAlhany, a 51-year resident of Pleasanton, passed away on Wednesday, November 11th, after a six-month battle with cancer. She was 92 years old.

Lila was born December 19, 1927, in Watsonville, and was the only child of Howard and Agnes (Hansen) Meade. She grew up in Santa Clara and Los Gatos and graduated from Los Gatos High School in 1945. Desiring to be a nurse, she applied for and was accepted to the US Cadet Nurse Corps which provided tuition, room and board for her to attend the Nursing program at Santa Clara County Hospital which was operated in conjunction with San Jose State University. After graduation in 1948 she worked for several years in San Francisco as a Registered Nurse before joining the Air Force, where she obtained the rank of Captain and spent two years in Alabama and then two years in Germany where she met her husband, James C. McAlhany. They were married in 1961 in Switzerland and returned home to California in 1964. Lila worked at several hospitals and clinics in San Leandro, Oakland, Danville and Pleasanton, working for 17 years at Kaiser Permanente’s Pleasanton facility before retiring in 2007.

Lila enjoyed being an active member of the Jose Maria Amador Chapter of the National Society Daughters of the American Revolution and American Legion Post 237. She was also a member of Alameda Oak Leaf Chapter #8 of Eastern Star for 66 years. She enjoyed spending time with a large circle of friends and in the earlier years of her retirement enjoyed traveling.

Lila will be deeply missed by her family and friends. She is survived by a son, Craig McAlhany and a daughter, Karen McAlhany, both of Pleasanton. She was preceded in death by her husband James, in 1994.

The family would like to thank the remarkable healthcare professionals at Kaiser’s Cancer Center in Dublin. They are all truly dedicated and compassionate people.

Friends and family are invited to a visitation on Friday, November 20th, from 10 am – 2 pm at Graham-Hitch Mortuary in Pleasanton. At her request no service will be held. Burial will be at a future date at Golden Gate National Cemetery in San Bruno. In lieu of flowers she had requested that donations be made to a charity of your choice.