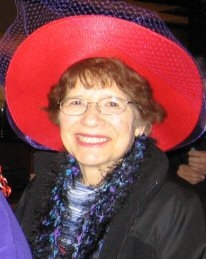 Pat was a resident for the past 25 years of Pleasanton, California.

She graduated from Oakland High School in 1946, later attending UC Berkeley, San Jose State College and Stanford University, where she received a Master?s Degree. She married Richard Lyle Crocker in 1947 with whom she had 3 children and 1 adopted son. She later married Ralph Luther Williams on August 19, 1988. Life began anew with Ralph as they shared interests and traveled the world together. Ralph made her feel young again.

Pat?s passions in life included her children, grandchildren and great grandchildren. As a reading specialist, teacher and administrator, Pat was a professional educator in the Castro Valley School District for over 30 years. She was active in many organizations, including Red Hatters, California Reading Association, American Association of University Women (AAUW), California Retired Teachers Association, and Vineyard Vixens. She loved to read, paint, play bridge and go to the theater. Collecting good friends was one of her best qualities.

She was preceded in death by her parents, brother Donald Elton Learner, granddaughter Rachel Crocker, and grandson Jacob Cooper.

Pat is survived by her beloved husband Ralph Luther Williams, sister-in-law Joan Learner, children Michael Crocker, Cathleen Boterenbrood (Jack), Randall Crocker (Carolyn), Stephen Cooper (Connie), Kim Toledo, Ronna Piazza (Jon), 15 grandchildren, 10 great grandchildren. The family would like to thank those that provided care to Pat for their tender care and support. We express gratitude to Cathy and Jack Boterenbrood for opening their home to our Mother and making sure she always knew she was adored. We will miss her easy smile and never ending love.