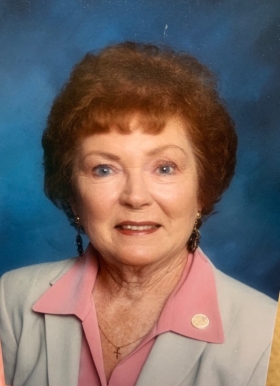 Patsy passed away on Saturday evening surrounded by her family after a courageous battle with lung cancer. Throughout the years, she has touched the lives of many with her leadership and optimism. Patsy was the rock for her family, and many others.

Patsy was born in Dubuque, Iowa. She and her family which included her mother, father and 4 siblings. Her siblings included 2 sisters, Elizabeth and Barbara, and her 2 brothers, Ed and Richard. They moved to the East Bay in 1944. In 1949 her father moved them all to Pleasanton. She later graduated from Amador High school and shortly after was hired at the Livermore Lawrence Laboratory.

In 1954, she married the love of her life, Victor Lund. They later had two sons. The eldest was Michael shortly fallowed by Jeffery. Patsy and Victor raised their two sons on a cattle ranch in Pleasanton when they eventually moved their cattle ranch near North Livermore. While also being a rancher’s wife and a mom of two boys, she worked for the City of Pleasanton in the financial department. She worked there for 29 years! She retired in 1991 and started her career with Mary Kay where she received many awards for her accomplishments. One of her many accomplishments included being president of the Alameda County Unit of Cattlewomen (then known as Cow Belles) from 1975 through 1976. One of her board members said it was a most productive term of office as three members of Patsy’s board had one or more babies from 1975 to 1977. Patsy took on the responsibilities of may board of directors offices as well as serving to chair many of the activity committees of the organization. Patsy was instrumental in forming the Alameda County Cow Belles’ mounted parade color guard, and she participated in many beef education demonstrations and presentation.

Patsy served as the president of the California CattleWomen from 1991 through 1992. During her term of office, California hosted the National Beef Cookoff. As Jean Barton, a long time California State officer said, “Patsy was a fierce advocate for the California Beef Industry at this time making sure that California needs were met.” Jean stated that Patsy was a “gorgeous lady.” Patsy believed that it was important for the beef industry that as many women as possible should be knowledgeable not only on the local level, but also on the state and national levels as well. Patsy and her husband, Vic were a wonderful couple working hard to better the California Beef Industry.

For 25 years, Patsy spent many hours volunteering at Valley Care Hospital. While at Valley Care she spent time on the committee and board. She made many friends there and was known by everyone. She was also very active with her church, Crosswinds. She dedicated lots of her time helping with Vacation Bible School and other children’s events. Patsy and her husband also helped serve coffee and bagels before Sunday church, also staying after to clean.

Patsy is survived by her loving husband, Victor; devoted children, Michael Lund and Jeffery Lund. In addition are her grandchildren, Cassie Lund and Tyler Lund. She is also survived by her sister, Barbara Mills and Elizabeth Olivares. Patsy will be missed by so many people.

There will be a celebration of life to be posted on a later date for friends and family. Help us celebrate her beautiful life.

In lieu of flowers, please donations to Hope Hospice, The Junior livestock Auction Boosters, The Main-street Museum in Pleasanton and the American Cancer Society.