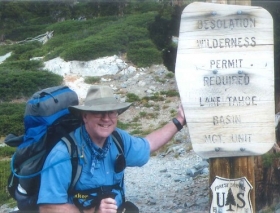 Randy was born in Milwaukee, Wisconsin to Bea and Emil Reber. After a severe Wisconsin winter in 1947, the family moved to Concord, California, where Randy grew up with his sister Janet. Randy lived the rest of his 75 years in the greater Bay Area. He was a member of the first graduating class at Clayton Valley High School in 1963 and continued his education at San Francisco State during the turbulent ‘60s. It was there that he met his first wife, Kathleen Colburn. After receiving a degree in business administration, he began his 39-era career in retail management at J.C. Penney, from which he retired in 2005. During those 39 years, Randy lead several company philanthropic efforts, including designing and building the first Penney Exercise Trail in Concord, working at United Way for six months, and setting up the first Pleasanton Hospice store with fixtures and registers.

Randy’s life-long passion was people, especially bringing people together and making opportunities for those people to stay in close contact. He and Kathy started an annual Christmas part that brought friends and family together, a tradition he continued even after Kathy’s death in 1988. He introduced many people, including his sons, to backpacking and arranged many trips every year from spring to fall, always looking for a new lake with good fishing. He spent hours searching for high school classmates to let them know of upcoming reunions. He regularly wrote letters and made phone calls to stay in touch with those farther away. Once you were his fiend, he never forgot you.

Randy wrote the following to be read at his memorial service. Since Covid has made a service impossible at this time, we would like to share this with you:

Reflections on my life

Have you been able to live in the country and grow up in the iconic ‘50s or live in harmony in a home with wonderful parents who worshipped each other…and a dad who came to everyone of your sports events?

Have you been blessed with great health that allowed you to enjoy sports and hike the mountains of California for over 50 years?

Have you had the love and friendship of two beautiful women in your life, or watch with pride and admiration your sons grow up to be wonderful dads?

Did you design and build something that gave you great satisfaction or get your hands greasy restoring an old Chevy, or worked in the community or helped a good friend through difficult times?

Can you say you have been blessed with nine grandchildren, each with their own special personality, and finally… Have you known and experienced true adversity and come away from it stronger and closer to God…

I can say I had all of this and more and could not have asked God to have given me a life as wonderful as mine.