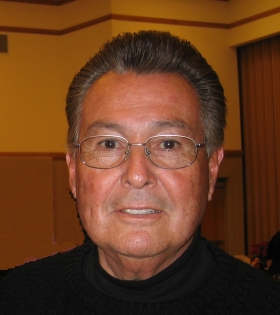 Raul Cortez passed away peacefully at his home surrounded by family on October 11, 2013 after a battle with cancer. He was born in June,1933 in Los Angeles to Manuel and Adelfa Cortez as the oldest of four brothers. He was raised in Pleasanton and graduated from Amador Valley High School in 1952. Raul joined the Navy and served his country for four years, then attended San Jose State University where he graduated with a Bachelor of Science in Business Management. After graduation, Raul made his living in the car industry where he became a much respected sales associate, reputable manager, and owner of various automobile dealerships.

Raul married his best friend and partner in life, Mariann, and they have been together for the past 50 years. They have one daughter together, Michelle, with Raul having five children from a previous marriage, one of whom passed after his birth. Raul and Mariann moved to Atascadero in 1980 with their daughter after purchasing the local Ford Dealership and renaming it Atascadero Ford with a business partner.

Raul was an avid lover of the lake and boating and could be found at Lake Nacimiento with his family when he wasn?t working. He enjoyed water skiing, listening to music, doting on his grandchildren and vacationing at Lake Shasta in Redding, CA.

At Raul?s request, there will be no services; a family celebration will be held in his honor. The family would like to thank Central Coast Hospice, 253 Granada Suite D, San Luis Obispo, CA 93401, for all their help during his last weeks in life, and asks that any donations be made to them in his name in lieu of flowers.