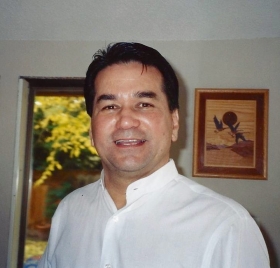 Roland Gerald Garrido of Danville, California, was unexpectedly called home to be with his Lord and Savior, Jesus Christ, on Thursday, June 11 due to cardiac arrest. He will be remembered for his generous giving spirit, quick and keen humor, and wondrous joy of life.

Roland was born on April 8, 1949, in Barrigada, Guam, to Jesus and Mathilda Garrido (both deceased). When he was three years old, the family moved stateside and settled in Hayward, California. Roland graduated from San Lorenzo High School in 1967 and then enlisted in the United States Air Force. During his military service, he aided in the cleanup and relief after hurricane Camille while stationed in Biloxi, MS in 1969. He received technical training while billeted in South Korea, which served him well in his career in technical sales, and later, recruiting. Roland was always ready for an adventure and enjoyed road trips, hiking and the outdoors, building and fixing things around the house, tinkering with cars, reading, and especially spending time with family and friends. He was known for his kind and giving nature and serving and helping others whenever the opportunity arose.

Just heard of Roland's passing. So sorry for your loss, my thoughts and prayers are with you. Roland worked for me at Xerox and was the ultimate professional who was always willing to take on any assignment. He will be missed.

The news of Roland's passing just came to me today, and I'm deeply saddened to hear of his passing. I worked with Roland while we were both at Sun and again at Xerox, and really enjoyed working with him. My heart is sad for his family and friends. Kacey Claiborne

So sorry for your loss as I've just learned this moment about Roland's transition. I am so overwhelmed with sadness. Roland was a God sent in so many ways during our few years working together at Sun Microsystems and at Fujitsu. I am thankful for the memories and blessed to see him last in Reno where I had the opportunity to met you Rhonda in 2012. He was one in a million and a wonderful spirit.

I had the privilege of working with Roland at Xerox Business Services. He was a pleasure to have within the group, professional, courteous, knowledgeable, totally a team player and a work ethic second to none. I just heard about Roland’s passing this afternoon and have let other of his former teammates know and folks are not only shocked but saddened at the passing of such a fine person.

I'm so sorry to hear about Roland's passing. I worked with him at Xerox, he was such a good person, very genuine and always a team player. He was willing to help out wherever he was needed. My prayers are with you and may God Bless you and give you peace through this difficult time.

I was blessed to work with Roland while he was with ACS/Xerox and even had the luck to meet him while I was I California. His smile and laughter brightened that day. You are all in my thoughts and prayers.