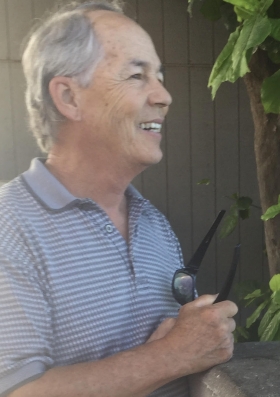 Wayne Allen Dodge died of a brain aneurysm at Eden Medical Center in Castro Valley at the age of 71.

Wayne was born in Hilo, Hawaii to Chow Fung and Fred Dodge. The family relocated to Rubidoux, CA where he and his siblings grew up. He served in the U.S. Air Force from 1966-1972 and then earned a bachelor’s degree from Cal Poly Pomona.

He married Roberta (Bobbie) Dodge on July 30, 1983 in Orange County. They moved north to Pleasanton in 1989 where they lived until his passing.

Wayne spent his professional career in the insurance industry, earning the Chartered Property Casualty Underwriter designation from the Insurance Education Association. He taught underwriting classes for the institute for many years. He served as a loss prevention specialist in workers compensation. He retired as an Assistant Vice President of Republic Indemnity Insurance Co. after a 40-year career.

He will be remembered for his unconditional love for his family and friends, his incredible sense of humor, his devotion to Bobbie and his unfailing gift for happiness which he gladly shared through his radiant smile for all he met.

He was a wonderful husband, brother, uncle and “Papa” extraordinaire for his children and grandchildren.

Wayne was an avid golfer who was dedicated to improving his game. He also enjoyed watching sports, particularly golf. In his youth, Wayne chased his dream of becoming a professional auto racer and spent a year in England racing. Later in life, he became an A-rated tennis player. He did everything with zest and passion.

He is survived by his wife of 34 years, Bobbie of Pleasanton; his children Nicole Millard and Timothy Wright; his sisters Carol King of Pasadena and Pamela Coon of Maui; his brother Mark Dodge of Spokane; and grandchildren, Zachary, Shayla, Max, Celia, and Izzi. He was predeceased by his parents and his sister, Emma Wolff.

The family would like to thank all the medical caregivers, Pastor Mike Barris and his wife, Debra, of GraceWay Church and all the wonderful members of GraceWay.