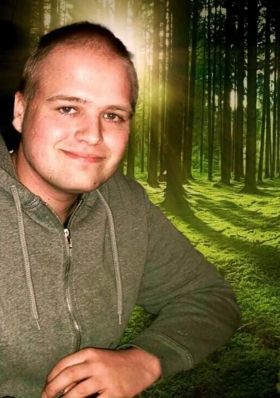 It was not a coincidence that God needed another angel on 11/11/2020. The significance of the spiritual number 1111, means guardian angels are nearby. Our beloved 22-year-old son, brother, grandson, nephew, cousin and friend Zachary Patrick Scanlan (Zack) transcended into heaven to be with God and his family of angels. The fact that it was also Veterans Day, November 11, is remarkable.

The world became a brighter place on April 29, 1998 when Zack was born in Normal, IL. He also called Kansas City, MO, Highlands Ranch, CO, and for the last 15 years, Pleasanton, CA home. Zachary was a beacon of light who fought Ewing’s Sarcoma Cancer for over 30 months like a brave warrior soldier. Zack kept his spirits up as well as those around him with his great wit and sense of humor.

At the age of 4, it was discovered Zachary was gifted with numbers and could multiply double, then later, triple digit numbers in his head. You could tell him the date you were born, and he would immediately tell you how old you were. Zachary was a boy scout in Sunol where instead of trying to achieve Eagle scout rank for himself, he would help his fellow scouts reach their goal by helping with several community projects. He was the most unselfish person you could ever encounter.

After graduating from Foothill High School in 2016, Zack attended Los Positas College. Zack took great pride in working at Chick Fil a, where he learned to coin the phrase “my pleasure”. “My pleasure” would follow Zack into the hospital where he would joke with the medical staff at UCSF Benioff and use the phrase in a stressful situation. Often the brightest person in the room, he was full of interesting facts that kept people wondering how he could know so much information. Zack loved his computer and smart phone where he often researched topics on just about every subject. His love of video gaming, often playing with his brother and friends was probably his favorite pastime. He especially favored classic “vintage” games. His love of heavy metal music was contagious. He had us all listening to bands like Metallica, one of his favorites. Everyone that has met Zachary has felt a sense of love and bonding with him. He especially loved spending time with friends and family.

As an adult on his own, Zachary accepted Jesus Christ as his Lord and savior and completed the sacraments of the Catholic Faith after meeting with Father Fili from St. Augustine church in Pleasanton. Zachary started saying the rosary nightly. He prayed for healing and that he would go to heaven. Rest assured, Zachary is in heaven.

Funeral Services will be held on November 28, 2020 at St. Michael’s Catholic Church, Wheaton, IL. A private viewing by invitation only will be at 9:00 am and a Mass will follow at 10:00 am. Zachary will be laid to Rest In Peace at Forest Hill Cemetery in Glen Ellyn, IL. In lieu of flowers, Zachary’s wish was to set up a scholarship for Foothill High School graduates for students with attention deficient disabilities and those that struggle with structured learning to help with college tuition costs. Donations can be made to Amador Valley Scholarships Inc. 4665 Bernal Ave, Pleasanton, CA 94566 in honor of the Zachary Scanlan Memorial Scholarship. In addition, donations can be made to St. Jude Children’s Hospital.